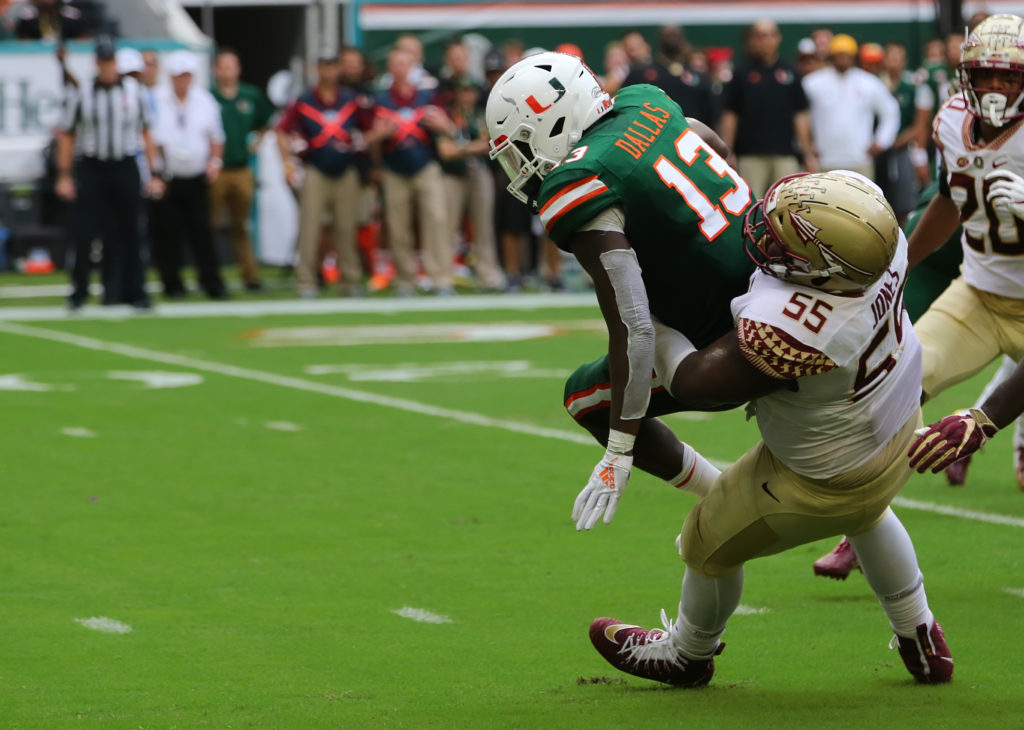 When FSU’s on Offense

Let’s be honest – this game is not likely to be pretty. Miami is getting carried (drug?) by their defense, ranked 15th by SP+. This is roughly the same level of play we saw from Virginia (18th by same metric). Miami’s strength absolutely lies in their linebacking corps, as we said preseason. Quarterman and Pinckney each have at least 7 TFL, and play assignment-sound football. What’s been a little more suprising is Miami’s defensive line, led by redshirt freshman Greg Rousseau, who has amassed 10.5 TFL and 8 sacks.

I believe it’s in FSU’s best interest to start Alex Hornibrook Saturday, as he’s been more consistent on short throws and quick game. The Seminole offense will need to try to break tendency with Hornibrook early on and try some throws downfield. This will help our receivers get open on the slants and underneath stuff. Also, keep an eye out for a heavy dose of the WildCam.

When FSU’s on Defense

Think about FSU’s offensive line issues, then change the color scheme to orange and green, and you’ve got Miami’s issues. Miami does like to run the ball – DeeJay Dallas and Cam’Ron Harris have combined for 146 touches, 800 yards, and 9 touchdowns. The Cane running game has helped to take some pressure off of the rotating quarterback door of N’Kosi Perry and Jarren Williams – neither of which have been particularly good. Statistically, they’ve been roughly on par with our own average-to-below-average quarterback play. Jarren Williams will start this particular game.

Miami does not have the deep threat like Terry. Brevin Jordan and KJ Osborn have been their main two threats, but the U does like to spread the ball around as well. Look for FSU’s defensive line to try to force Miami to drive on them and create havoc and TFLs – similar to the game plan against Syracuse.

I’ll admit it – I (Cory) am a Nole. Noleblooded since before birth. I can deal with the Lizards. But I hate the U with a passion. Maybe it’s the fact that, growing up, we always seemed to get tripped up by them, and by that point, UF wasn’t really as much of a problem. It may be the middle-fingered Warchant. Maybe it was the missed field goals. It might even be the fact that Gator fans always seemed more…civil. While I think the game will be close, I want to beat Miami senseless. I want to beat them to the point that they cancel football altogether.

John: 35-14 FSU. FSU gets after the QB a ton in this game, surpassing our single game sack high. Taggart and Briles find unique ways to get Akers and Laborn the ball again, keeping pressure off Hornibrook.

Cory: 28-21 FSU. Neither team gets much going offensively due to a distinct lack of an offensive line between the two teams, but FSU edges out the Canes in an ESPN Classic thriller.

Danielle: 28-21 FSU. FSU keeps pressure on Jarren Williams and forces him to beat us deep. Creative quarterback play like we saw against Syracuse results in good offensive plays for the Noles.

Week to week, quarter to quarter, I never know what FSU will do. One thing we seem to be consistent about is a weak fourth quarter so we damn sure better go into the 4th with a big lead! If Cam is on we can maintain possession, rest the defense for the 4th and win the game. Obviously, Miami’s strong defense will be keying on Cam so we will have to open up the run by getting the passing game going. That’s what worries me; will the passing game be there when we need it. If our defense is forced… Read more »