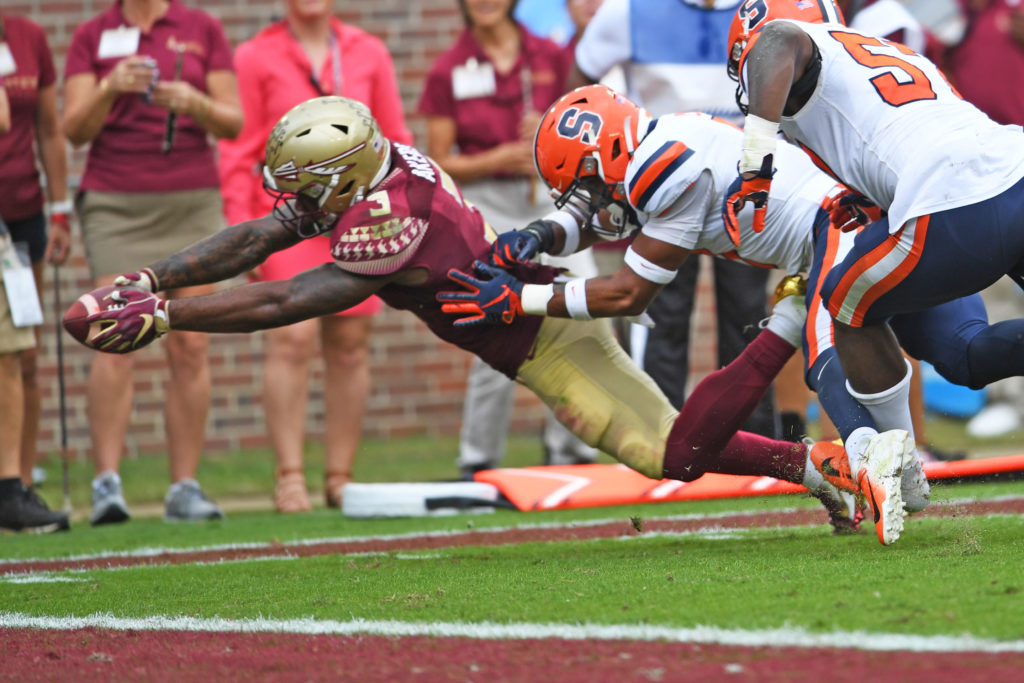 Florida State remained undefeated at home in ACC play on Saturday and equaled last season’s conference win total. In what may have been its most dominant team performance of the year, FSU easily defeated Syracuse at Doak Campbell Stadium 35-17 in a contest that wasn’t even as close as the score indicated.

While Saturday’s victory saw a complete team effort, there were some Seminoles who shined above the rest. Handing out game balls this week is Fifth Quarter moderators Mike Ferguson, John Cooper, Cory, Garlic Wing Sauce, Rednollah and for the first time, Salty Chris Fowler:

Unanimous Game Ball: Cam Akers, RB
Junior running back Cam Akers continues to be the focal point of the Florida State offense. On Saturday, Akers tied an FSU record with four rushing touchdowns while tallying 144 yards on the ground. Akers also caught a pair of passes, finished 2-for-3 passing for 26 yards and rushed in a 2-point conversion. With the 4-touchdown effort, Akers is now tied for sixth-place all-time at FSU with 31 career total touchdowns. With 92 total points for the season, Akers leads the ACC and ranks fifth nationally.

Cory, Garlic Wing Sauce, Salty and Rednollah: Hamsah Nasirildeen, S
It was an all-around dominant day for the Florida State defense as it finished with seven sacks and 12 tackles for loss. The player near the football most often however, was junior safety Hamsah Nasirildeen. Nasirildeen finished with a career-high 17 tackles and one sack in Saturday’s victory over the Orange. Nasirildeen leads the Seminoles with 58 total stops this season. The 17 total tackles for Nasirildeen was the most for an FSU player since A.J. Nicholson recorded 19 in a win over Boston College in 2005.

Mike: Marvin Wilson, DT
FSU junior defensive tackle Marvin Wilson was named a semifinalist for the Bednarik Award on Tuesday – and with good reason. Wilson remained dominant against Syracuse on Saturday. The Houston native finished with six tackles, including three TFL and two sacks. For the season, Wilson is tied for second on the team with 41 total tackles and leads the Seminoles with five sacks and ranks second in the team with 7.5 TFL.

John: Robert Cooper, DT
Marvin Wilson was outstanding on Saturday, but among FSU defensive tackles, he was not alone. Sophomore Robert Cooper may have had the best game of his young career in Saturday’s victory over Syracuse. Cooper tallied eight total tackles, two TFL and a sack. The sack was the first of Cooper’s young career.

John, Garlic Wing Sauce, Rednollah and Salty: Tommy Martin, P
The numbers weren’t eye-popping, but walk-on punter Tommy Martin left little to complain about on Saturday. Martin averaged 38.2 yards/punt on five boots, with a long of 43. Martin also had a punt downed inside the Syracuse 5-yard-line. Syracuse only returned 1 of those 5, and that for only a 4-yard gain.

Mike Ferguson is a contributor for Fifth Quarter FSU and the editor of The Daily Nole. Be sure to follow Mike on Twitter at @MikeWFerguson. Follow all of Mike’s work by liking his Facebook page.