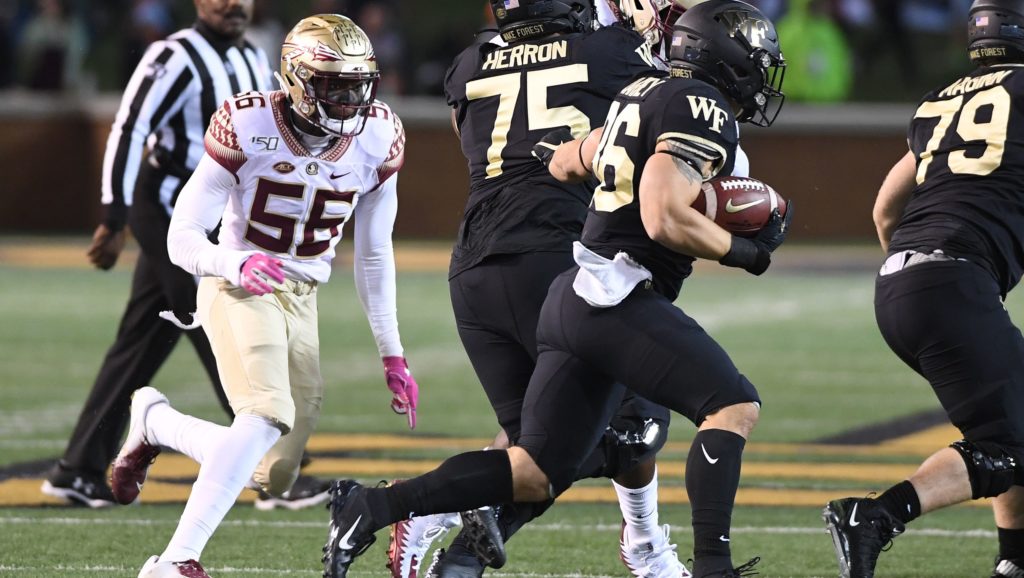 We’re admittedly a bit later than usual, but before Florida State sets its sights on a critical home contest with Syracuse, we needed to reflect on Saturday’s hard-fought 22-20 loss at Wake Forest.

The defeat snapped a 7-game winning streak for the Seminoles over the Demon Deacons and dropped FSU back below the .500 mark — both overall and in ACC play. Still, there were some performances worth recognizing. Handing out the game balls this week is a smaller crew to include Fifth Quarter moderators Mike Ferguson, Cory, Danielle Kelley, Rednollah and Garlic Wing Sauce:

Mike, Cory, Danielle and Garlic Wing Sauce: Cam Akers, RB
Florida State was unable to come away with the victory on Saturday night in Winston-Salem, but the blame cannot fall on junior running back Cam Akers. Akers finished the night with 199 yards of total offense and a pair of touchdowns. Akers rushed for 157 yards on 30 carries and a score. Akers also caught four passes for 42 yards and a touchdown. Akers currently leads the ACC with 11 total touchdowns.

Rednollah: New faces on the offensive line
Neither started, but the usually unstable Florida State offensive line found a bit of stability from a couple of unlikely faces. Redshirt junior center Andrew Boselli, who replaced an injured Baveon Johnson, and freshman tackle Darius Washington each held their own for FSU. The Seminoles put up 449 yards of offense and nearly 170 yards rushing. Both players could be mainstays in the FSU lineup moving forward.

Mike and Rednollah: Emmett Rice, LB
He didn’t make many loud plays on Saturday night, but redshirt junior linebacker Emmett Rice was all over the field. The Miami native finished with a game- and career-high 14 total tackles. Rice also recorded one of FSU’s two tackles for loss.

Garlic Wing Sauce: Asante Samuel Jr., CB
Throughout the night, sophomore cornerback Asante Samuel Jr. found himself matched up with some of the best receivers in the ACC, but overall, Samuel held his own. Samuel recorded four tackles in the loss and a team-high two pass break-ups.

Mike, Cory and Danielle: D.J. Matthews, WR
Punt returner D.J. Matthews had just one punt return for eight yards, but on a wet night, handling punts can be an adventure. Matthews did a nice job catching punts and avoided giving up field position or more importantly, the football.

Rednollah and Garlic Wing Sauce: Tommy Martin, P
Despite starting the year with two 4-year starters at the kicker and punter positions, walk-on Tommy Martin has arguably been Florida State’s biggest bright spot in the kicking game. Martin punted six times for an average of 41.5 yards per punt and a long of 47. One of those punts was killed inside the Wake Forest 20-yard-line.

Mike Ferguson is a contributor for Fifth Quarter FSU and the editor of The Daily Nole. Be sure to follow Mike on Twitter at @MikeWFerguson. Follow all of Mike’s work by liking his Facebook page.