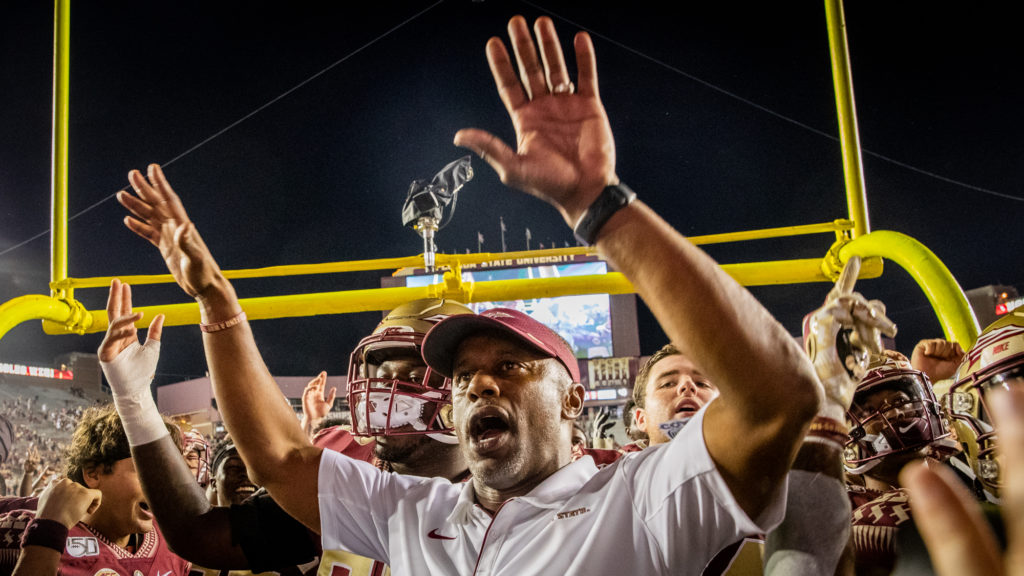 Where there’s smoke, there’s fire. We’re starting to hear more and more that FSU is looking to take the football program in a direction that doesn’t include Willie Taggart.

Here’s what we know:

Fifth Quarter sources let us know Sunday morning that a conference call between FSU and Jimmy Sexton was to be held at 2 pm that day. That’s serious. No one’s taking their Sunday afternoon to call the most powerful man in collegiate coaching to talk about church. A conference call did take place, as admitted by our athletic director. This begged the question of whether or not we would lose our coach after this weekend. Urban Meyer was the name that came up – more so than the usual level that we hear. Tuesday, I was flagged down by a relative of a former player who believed that Urban had been hired, and I let them know that calmer heads had prevailed, but that a fraction of the boosters and others did want to hire Urban Meyer. Apparently the administration said no – thankfully – as if we could afford him anyway.

When there’s smoke, there’s fire – once an agent gets involved. Have we forgotten the overtures from LSU for our former head coach? This ultimately resulted in his hiring at Texas A&M with a $75 million, fully-guaranteed salary. We have been here before. Also, Florida fans were told the same thing about Jim McElwain after a similar meeting years ago. Coaching “moves” and agent meetings only serve the coach – the playing to multiple schools obfuscates the real truth and jacks up the bidding price for all concerned – remember what FSU had to do each time Jimbo flirted with LSU.

As Fifth Quarter sources have told us before, we need to support FSU “by any means necessary. Whether that means getting the admin out and a new admin in, coaches out and new coaches in, we are going to physically, fiscally, and emotionally support the program that we believe in.” And that is what we are going to continue to do, no matter who the coach is. At the end of the day, the statement by our athletic director is correct. We need to concentrate on wins right now. The remainder of the season is everything.