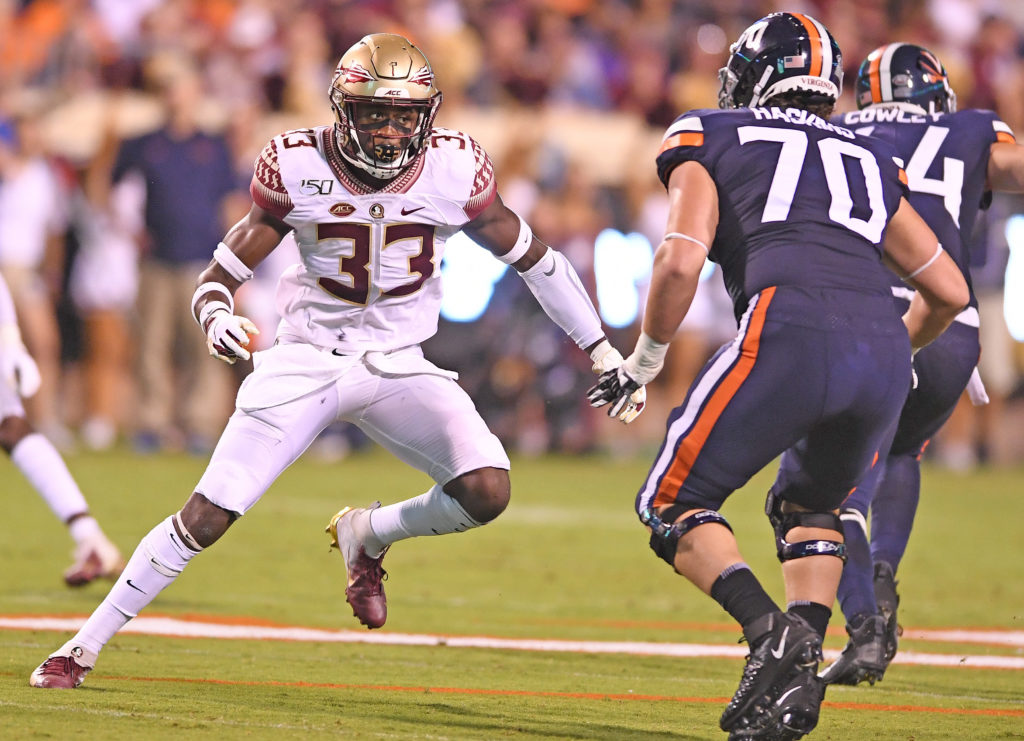 This article is the first of a series that I’ve been wanting to do this season, but just haven’t gotten to get it together so far. We have assembled a crack team of coaches in our FifthQuarter FSU Discord and given them access to the game film. We then let them at it and have them tell us what they see about the personnel and what FSU is trying to do. So we gave them access to the Virginia film and asked a couple of questions:

The results were very clear. Our coaches told us that while the linebacker play was better against Virginia, it left a lot to be desired. One ‘backer in particular took a lot of heat – Leonard Warner. Let’s go to the film.

So let’s look at this a little. The first guy coming in from the right is Leonard Warner. We see immediately that he has backup coming behind. As one of the coaches said, “35 should be coming downhill with a head full of steam. Even if he missed, while doing that, he’d affect the runner and possibly let a teammate make a play. Play this inside out, you’ve got the sideline as an extra dude and if it cuts it back inside, you’ve got the pursuit chasing it down. Literally he does the opposite of what you’re taught to do on defenses since, well, forever.”

Nobody was lining up to give Warner the Butkus award previously, but what about the idea that the D-Line was making the ‘backers look bad? “I don’t see that. I see timidness, and bad technique (from the linebackers).” Just take a look at this defensive effort on a zone read: 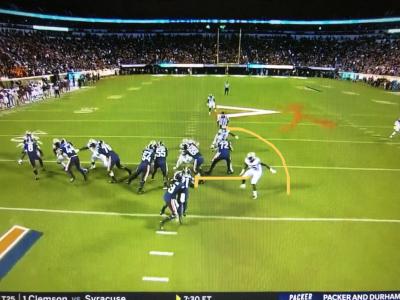 So we see Warner in good position to take care of either the quarterback or the runningback (preferably the RB), and D-Jax behind him to take the other. There’s just one problem – Warner didn’t take care of either. He doesn’t hit anyone on the play, making things more difficult for D-Jax.

Is there hope? Sure – as another coach noted, “I think Jim Leavitt’s presence will reflect next week on defense. I was impressed with the improvements but there’s still so much to work on. Stuff like figuring out how to handle switch releases/rub plays in zone, keeping even better gap integrity, learning how to better defend plays out to the sidelines, etc.” We’ll see come Saturday.

So what about quarterback play? At what point do you look at going to your backup? Do we bench Blackman?

Why not? Let’s ask the experts:

I wouldn’t go to the backup. Dude (Blackman) has over 800 yards passing, 9 TD’s and only 2 INT. He may not have played a great game vs UVA but we’re averaging 33 points per game. In theory, that should be enough to be undefeated. Hell, 24 points should be enough to win, when you have a competent D that can hold folks to 17-21 PPG – which is what you should realistically aim for. In my process as an OC, if I’m thinking about a QB change, I have to take into account knowledge of our O, how each guy practices, and if the other guy gives me a better chance to win. I don’t think Horni gives us a better chance, I see it as even and if my number 1 is throwing for 300 ypg, 3 TD’s a game and not turning it over, how can I expect the backup to come in and do more?

I think the team is operating on extremely thin margins of error and Blackman can’t miss wide open guys, take unnecessary sacks, or force ineligible men downfield penalties. He’s a good QB and I wouldn’t even think about benching him unless he really stinks it up.

Another thing we asked was about the Illegal Man Downfield penalties – should your quarterback pump-fake on an RPO? The answer was simple: “Yeah, he shouldn’t be pump-faking on those. Those linemen move quickly downfield so you’ve gotta make a decision on where to go with the football.”

It sounds like our resident coaches have some optimism about the direction this team is headed. We talked about personnel changes, and it seems those changes have, in part, been made. I’m excited to watch the Louisville game and see how our defense looks against a good Cardinal run game.

If you enjoyed this, please let us know! We think that the average fan would love more analysis – let us know if we’re right!

Great article. I like how they broke down the LB play. And explained how bad technique is what’s causes many of our problems.