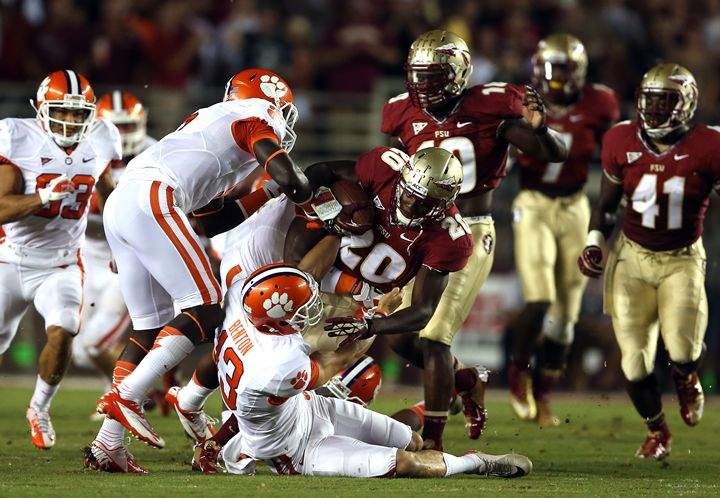 The idea of a “company culture” is fast becoming the new “synergy” of the workplace. Truth be told, a good culture drives most successful entities. It’s the attitude that leadership wants its workers to have, and to not have a good culture, or worse, a toxic culture, keeps businesses and even sports teams from accomplishing their goals. If the culture is toxic, you cannot weather the highs and lows that come over the course of a season. This is why you must not only dictate but also promote those who embody the culture you seek. Top teams have leaders who embody a winning culture. FSU must promote players with fight and intensity, or this long season will get even longer.

Buy-in on defense consistently, and offense at critical times seems to be the focus of the issue. We have a talented roster, and the fan base who holds the coaches accountable, but we lack execution. The best way to change the culture is to play those who have bought in.

My suggestion? – play the guys who committed to you when you were at your worst. Not all of them are ready, but some are. When i look at the defense, you’ve flipped your linebacker room. There is no reason to accept undisciplined play from vets when rookies are eager to run through a brick wall. I know what I’m getting out of Brooks and Jackson. Give me a healthy dose of Deloach, McRae and Glenn. In the secondary you’ve got too many bodies to not play some fresh faces. Take the good with the bad, and grow stronger.

Offensively, it’s almost there. The Offensive line won’t be an overnight fix. I’ve got no answers for you so I’ll defer to Coach Clements – my only suggestion is get the fullback more involved in the run game. I’m liking the WR mix. Hopefully we will find the 5 we like and roll with it, but if it’s me, I’d like to see more of Harrison and Young.

I’m a fan of FSU, an alum, and a guy who can see the game from multiple angles. I just see things different. It used to be more than just being happy to wear the uniform and run out of the tunnel. Make no mistake -that’s part of it. More importantly, why do you wear the uniform? I wanted to be named with the likes of Dane Williams, William Floyd, Pooh Bear, but I also wanted guys like Lonnie Pryor and Freddie Stevenson to say that they built on a foundation I set. I don’t see a multi-generational passion from these guys. That’s ain’t on coaching – that’s how folks were reared or the environment they grew up in. No coach can make you want to be excellent. It’s gotta start from within.

I talk often of situations that weren’t optimal as players – but we got out of them. The drive to earn playing time and recognition led me to do things that put my teammates ahead of myself. I had, at different times, a broken hand, broken jaw, a torn labrum, and a bunch of minor injuries – all for the pursuit of wins. It didn’t always work out, but you could tell the passion was there. You can’t tell me these older guys really want to go to the league besides the fact that they’d get paid.

It’s on both sides of the ball. The younger guys have more excitement to play and less off-field things to worry about. This freshman class, as well as some of the players from the last class, are seemingly selling out more than others. Sometimes pulling playing time from your older players can also refocus the veterans. The bottom line is that you’ve got to put the best 11 on the field who physically and mentally want to go out and execute the plays given to them. It might be time to narrow down the focus of who is going to get snaps to those who you know will be here beyond this season and next.

That’s why I really like Tribe19 and what I see from some in 20. I don’t want folks who don’t want to be here. I want the kids who have seen FSU have the worst season in 40 years, and still want to be Noles. I want players who still decided to play for Taggart. But that’s not the end point – we need players who want to stay on the field. The I’m gonna fight for my position because it isn’t an inalienable right players. The screw your feelings because I’m upholding the Florida State standard players.

Freshman play early everywhere – this isn’t new. But if you want to change the culture, you have to play the guys who play the game the right way – if that’s underclassmen, so be it. The reality is that they’ll be replaced if they don’t buy in – from the coaches to the players. If Taggart is fired, Barnett possibly before that, then how can you think you’re safe?

We are going to need a different energy moving into conference play and a schedule that faces more talent than we’ve seen in the past few weeks. Aspire to inspire change – to heck with anybody who don’t want to represent the logo the right way.

Freshman potentially getting start over Djack.